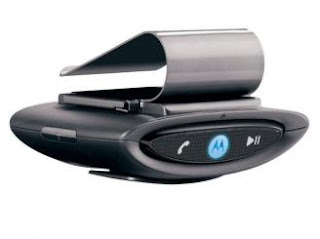 I vote Bluetooth as one of the most bothersome consumer wireless protocols to date. Yes, some may argue there may have been others, but none have really caused as much frustration for me as the damn Bluetooth headset for my cellphone.

I used one for almost a year with all the irritations that came with it - Needed to charge it using a tiny charger tip that was unique to the device, people on the other end could not hear me when the battery was low, the thing would not fit in my ear properly, and always had the nagging feeling a device transmitting at 2.4GHz almost half inserted into my brain was doing a better job at cooking my brain!

Recently, with some of my team members at work situated in Ireland, morning conference calls have been plenty. And of course, they have to coincide with my commute to work (yes, I know, those who know me point out its not really a "morning" commute!). Having given up on BT headsets, I reverted back to the old faithful, yet unfitting-in-my-tiny-ears wired headset that came with my Blackberry. But the wire dropping down the side of my face, and getting entangled with the rest of the wires in my car was still irritating. Ok, enough background. I have now found, bought, used, and tested the perfect device for my car. The Motorokr T505 Bluetooth Speakerphone. I vote this to be one of the must-haves for gadget fiends out there. This thing looks like a space-age garage door opener, clips on to the visor, and pairs with your Bluetooth enabled cellphone in a jiffy. The device has a built-in speaker that is amply loud and clear (mind you, louder than the speaker on the Blackberry 8800 which many believe to have one of the best spearkerphone capabilities). The microphone is sensitive, and in a few conversations, the person on the other end could not tell I was on a speakerphone. The T505 packs in impressive echo and noise cancellation that helps you be heard clearly on the other end without any annoying feedback. Now, here is the kicker -- you can press a button on the device, a sexy British woman's voice announces an unused FM radio station that the device dynamically finds and starts transmitting at, for your car's radio. This allows the speakers of your car to take over -- the person you are talking to can be heard over the car's audio system, while the microphone on the device continues functioning. Voila! There you go -- fancy car bluetooth system that you can use even in your Ford Pinto! Trust me the device works well.
A few things I wish it had -- should have given you the choice of your own FM station, a little LCD screen to show the frequency, the power ON and the FM station buttons on the front of the unit.
Sidenote: It will also transmit over the air any music from your phone to the FM station; that is if your phone has audio over Bluetooth.
Check out other specs here and buy from Amazon (thats where I found it to be the cheapest).
PS: I don't work for Motorola although this blog post makes it look like they paid me fifty bucks to write this post.
Posted by Sumit Awasthi at 10/18/2008 11:54:00 PM

I can attest to the sound quality - can't even tell it's a speakerphone.

I agree with mike. The speaker quality is awesome. I drive all over orange county using this device and it never fails. The battery life is long, unlike the bluetooth devices.

my satechi is much more better.